My stomach hurts… Can you pass me some Pearls?

Did you know that people have been swallowing precious Pearls whole and in powdered form for ages as a medicine for sickness? This is mostly done in Asia and the interesting fact about this is, that Pearls are mostly made of calcium carbonate, which is an antacid, so about the only thing they are curing is an upset stomach. This is one expensive antacid! They should try some Tums…they would be a lot less expensive! 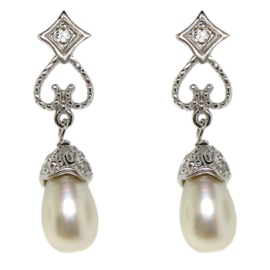 This is also an interesting story… while researching about Pearls I came across and an article written about Cleopatra. Apparently she swallowed one of her expensive 10 million sesterces (sesterces were the nickels of the ancient world) pearl earrings to win a bet against Mark Antony. Pearls were a popular adornment for the wealthy in the Roman times. The only pearls in existence were natural ones, they were a lot more rare than they are today, making dissolving like she did, pretty careless.

The story goes that, Cleopatra made a bet with Mark Antony, saying that could host the most expensive dinner in history. According to the Roman historian, Pliny, she dropped one of her outrageously expensive pearls from her earrings, into a cup of wine vinegar until it dissolved and then drank it, to win the bet. A Roman soldier earned about 900 sesterces a year, so that was a lot of money back then! Another source, said that she took one of her pearl earrings and crushed it into her wine and then drank it… either way it was a wasteful thing to do!

If she did just drop the pearl in the wine, how long would it have taken for it to dissolve? The calcium carbonate in a pearl reacts with the acetic acid in vinegar to produce calcium acetate, water and carbon dioxide. If she did do this, then she would have had to swallowed it whole because dissolving it would have taken way too long, almost 36 hours. So crushing it up , putting in the wine and drinking it, would make more sense. If she did dissolve it over time (thinking about her bet in advance) you could use about centimeter sized round, natural pearl and place it in the wine vinegar… nothing would happen at first, but overnight, you would probably see a greyish film around the pearl. It would take another day or so, before the pearl would break apart. At about a month or so, it would probably float to the top of the vinegar and would be an unappealing mushy substance.

Jewelry Warehouse is a locally owned jewelry store that has 2 locations located in Columbia SC. We have been voted best jewelry store by the State newspaper – the largest paper in SC, for 22 years in a row. Originally founded in 1969, George Satterfield started the Jewelry Warehouse. It was his vision to always get quality jewelry but to price lower than traditional jewelry stores. After 40 years his vision has continued even after his death in 2005. With the growth and development of the internet, the plan is stronger than ever as not only does The Jewelry Warehouse still offer the best price and quality in SC, it now has the best pricing in the United States! People from California to New York now can get jewelry that is sold in the cities for significantly more, at South Carolina pricing. With a satisfaction Guarantee, buying from Jewelry Warehouse gives people everywhere a risk free opportunity to try us and save on quality merchandise.
View all posts by Jewelry Warehouse →
This entry was posted in Jewelry, Jewelry History, Jewelry Trivia & Facts and tagged cleopatra, jewelry warehouse, pearls. Bookmark the permalink.

1 Response to My stomach hurts… Can you pass me some Pearls?