Is Platinum the same as White Gold? – The answer is, no, they aren’t the same. Platinum and White Gold have their own properties which make them each different. Platinum, which is white, differs from its white gold counterpart not only because it’s more expensive but also because it’s denser and therefore heavier. 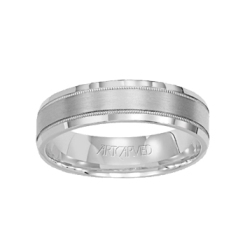 Platinum is the purest, most durable and most valuable of the metals used for fine jewelry.

Platinum is soft, ductile and easily worked, yet strong and durable.  Its white luster shows little wear and beautifully enhances gemstones, making it ideal for settings. Platinum has been enjoying a resurgence as part of the current interest in white metals.

It is usually found in conjunction with other metals known as the platinum family.  They are in order of their rarity: palladium, rhodium, ruthenium, rhodium, and osmium.  All are used to some extent in our industry.

White Gold is the sturdiest of the colored golds, which is why it’s frequently used in prongs in diamond setting. Such white gold settings resist hard blows and tend to enhance the color of the stones. Like platinum, white gold is enjoying a resurgence in popularity with today’s interest in white metals. 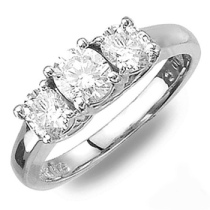 Some people cannot wear certain types of gold jewelry.  A very small percentage of these are actually allergic to gold or the other metals used in some alloys.  In other cases, a dark residue is left on the skin; this results from a reaction between the alloyed metals and chemicals present in the skin, cosmetics, or environment (smog and balmy ocean air are among the worst offenders).  Occasionally, dust particles embedded in the skin or clothing rub off minute bits of gold that appear as a dark smudge.  People who cannot wear one type of gold may be able to wear another without problem.

Ancient Egyptians were the first to recognize the beauty and endurance of platinum. In fact, one high priestess commissioned an artisan to carve hieroglyphics in platinum on her casket – designs that are perfectly intact today, 2500 years later! King Louis XVI of France favored platinum jewelry during his reign in the late 1700s. Some of the world’s most famous diamonds have been set in platinum, including the Hope Diamond.

Platinum use peaked in the U.S. in the early part of the century, but after 1940, during World War II, the government banned its use for all non-military purposes, including jewelry. To accommodate consumers’ preference for its white luster, white gold took its place during the embargo. However, once restrictions on platinum ended, it did not regain its previous popularity, until recently. Today, platinum is once again in style as the modern millennium metal, particularly in bridal and high-end fashion jewelry.

Supplies of platinum remain scarce, which contributes to its higher cost. In terms of rarity, consider that 10 tons of ore must be mined to produce a single ounce of platinum. In contrast, it takes three tons of ore to extract one ounce of gold. The main suppliers today are Russia and South Africa, with Canada, Columbia and the U.S. producing smaller amounts.

In the U.S., platinum is used in near pure form for jewelry because of its strength. Strict laws maintain a very high level of quality for platinum and platinum alloys. It is alloyed only with “sister” metals such as iridium, osmium, palladium, rhodium and ruthenium, and by law, unsoldered platinum articles may contain no more than 1.5% base metal content. Platinum jewelry stamped “IRIDPLAT” contains 90% platinum and 10% iridium. A piece marked “PLAT” must contain at least 95% pure platinum.

Tips to Clean and Care for Platinum:

Jewelry Warehouse is a locally owned jewelry store that has 2 locations located in Columbia SC. We have been voted best jewelry store by the State newspaper – the largest paper in SC, for 22 years in a row. Originally founded in 1969, George Satterfield started the Jewelry Warehouse. It was his vision to always get quality jewelry but to price lower than traditional jewelry stores. After 40 years his vision has continued even after his death in 2005. With the growth and development of the internet, the plan is stronger than ever as not only does The Jewelry Warehouse still offer the best price and quality in SC, it now has the best pricing in the United States! People from California to New York now can get jewelry that is sold in the cities for significantly more, at South Carolina pricing. With a satisfaction Guarantee, buying from Jewelry Warehouse gives people everywhere a risk free opportunity to try us and save on quality merchandise.
View all posts by Jewelry Warehouse →
This entry was posted in Jewelry, Jewelry Cleaning Information, Jewelry Guides, Jewelry History, Jewelry Trivia & Facts and tagged cleaning jewelry, Jewelry, jewelry warehouse, platinum, white gold. Bookmark the permalink.