Posted on February 25, 2013 by Jewelry Warehouse 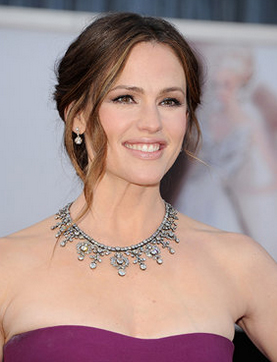 Did you watch the Oscars last night? While watching the celebrities arrive on the red carpet, I was noticing some trends in jewelry this year… Much like what I saw at the SAG Awards, most celebs wore bold earrings, with bracelets and rings, such as Jennifer Aniston, Charlize Theron, and Halle Berry…

Jennifer Garner wore a huge jaw dropping necklace, which was by Neil Lane, with lovely deep purple gown by Gucci. Her husband, Ben Affleck, won an Oscar for his movie “Argo.”

The prediction for jewelry was emeralds… but where were they at the Oscars?

The most talked about gowns and jewelry of the evening were worn by Oscar winners, Jennifer Lawrence and Anne Hathaway. While receiving her Oscar, Jennifer accidentally tripped on her long flowing white Dior Couture gown going on stage. Her lovely sparkling Chopard necklace, draped around her neck and fell down her backside, giving it a striking and elegant look. Anne’s necklace was quite amazing as well, as it had flower like designs of various shapes that also trickled elegantly down her back. Her jewelry was by Tiffany & Co. and was worth $485,000. Anne informed one of the E! Entertainment hosts that she picked out her Prada dress, just 3 hours before the event! 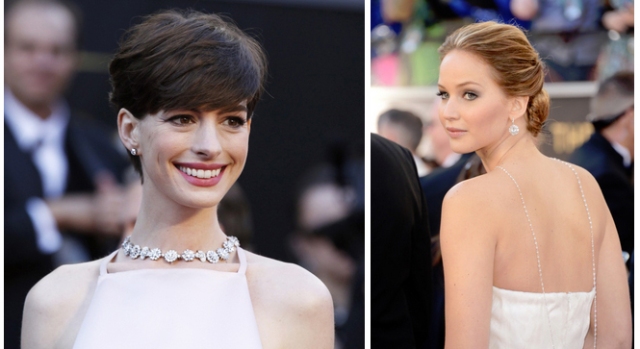 Which celebrity’s jewelry did you love the most? Post them in your comments below!

Jewelry Warehouse is a locally owned jewelry store that has 2 locations located in Columbia SC. We have been voted best jewelry store by the State newspaper – the largest paper in SC, for 22 years in a row. Originally founded in 1969, George Satterfield started the Jewelry Warehouse. It was his vision to always get quality jewelry but to price lower than traditional jewelry stores. After 40 years his vision has continued even after his death in 2005. With the growth and development of the internet, the plan is stronger than ever as not only does The Jewelry Warehouse still offer the best price and quality in SC, it now has the best pricing in the United States! People from California to New York now can get jewelry that is sold in the cities for significantly more, at South Carolina pricing. With a satisfaction Guarantee, buying from Jewelry Warehouse gives people everywhere a risk free opportunity to try us and save on quality merchandise.
View all posts by Jewelry Warehouse →
This entry was posted in Celebrity Jewelry, Diamonds, Jewelry, Jewelry Brands, Jewelry Guides, Jewelry History, Jewelry Metals, Jewelry News and tagged academy awards, anne hathaway, charlize theron, diamonds, dior, harry winston, jennifer garner, jennifer lawrence, Jewelry, naomi watts, oscars, oscars 2013, tiffany. Bookmark the permalink.